There has been a lot of talk recently about ‘Points Per Game’ and whether that system should have been used to decide placing for the now-expunged 2019-20 season. Many thought it should be but it wasn’t but did you know it had been used to decide league positions in this very league before?

Well it has, and it was less than 20 years ago in the Kent League Premier Division.

The 2002-03 campaign didn’t reach the finish line and a Duckworth-Lewis method was needed. PPG was used and Cray Wanderers were crowned as Champions. 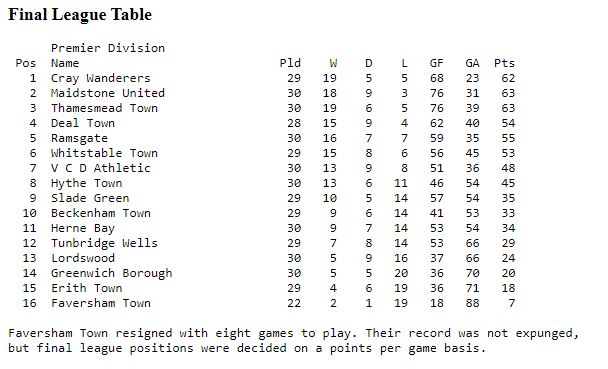 Cray had played a game less and had a point less than Maidstone Utd and Thamesmead Town but their PPG of 2.14 was greater than the 2.10 of the other 2 sides handing them the title.

A system was needed to be used due to Faversham Town dropping out with 8 games to play, due to non-payment of fines.

It would be fair to say that Cray would have no doubt beaten the basement boys had they played so it is hard to argue that this was not the right result.

There was no promotion or relegation in these days but it was introduced in the following season and once again Cray Wanderers finished top to gain a deserved promotion to the Isthmian League.

Ironically, had PPG been used across the pyramid this year, Cray would have again benefitted and sealed a 2nd consecutive promotion to take a place in the National League South.