From the start of the 2019-20 season, Sin Bins are to be introduced across the grassroots football for cases of dissent.

Specifically for us, Sin Bins will be in operation from Step 5 and below so will include our Premier and First Divisions aswell as all Cups that we take part, with the exception the FA Cup and London Senior Cup.

Dissent, defined as a challenge to the authority of the official(s) through the use of language and/or action, has been specifically chosen in an attempt to improve the behaviour, atmosphere and experience for all involved in this level of the game. As a result of this immediate sanction being issued, the £10 administration fee usually associated with a yellow-card offence has been removed.

From July 1st 2019, all cases of Dissent during matches featuring step 5 and below teams, including pre-season friendlies, must be dealt with by using the Sin Bin process. For all 90 minute matches, the Sin Bin period will be 10 minutes.

Below is a handy slideshow used by the presenters of the training sessions put on for Club Officials, players and referees over the past few weeks.

This Quick Reference chart could also be useful as it shows how sin bins will work alongside Yellow and Red Cards. 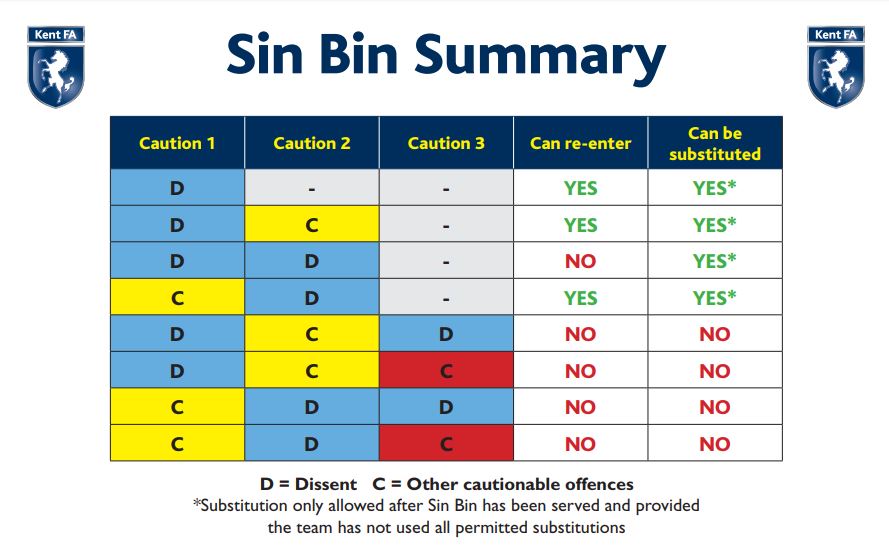 It is important to emphasise that using offensive, insulting or abusive language or gestures is not dissent and remains a red-card offence.

Attack the change with positivity and the game will be better for everyone. Families will return to games and crowds will improve.

There will be further information going out to Clubs in the coming weeks regarding Sin Bins so that everyone will be ready in time for the Pre-season friendlies in July.

SCEFL Chat on the SELK Podcast