Kent Football United have announced their first three signings ahead of the 2020/21 season. 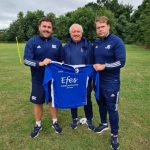 The Club have a new Management set-up of Lloyd and James Bradley plus Ben Kirky and they have been tasked with improving a side that had a dissapointing campaign last time around.

Their first job has been to recruit new players and they have now reveled three names that will be taking their place in the squad.

In comes Ross Morley, Aaron Seales and Archie Valler, all from Tudor Sports and more than happy to follow the managers into the spotlight of the SCEFL.

Morley is being handed the Captain’s armband and that is likely to inspire a man who was lethal in front of goal in the Kent County League.

Kent Football United have been busy putting triallists through their paces in recent weeks and more new signings are sure to be announced soon.