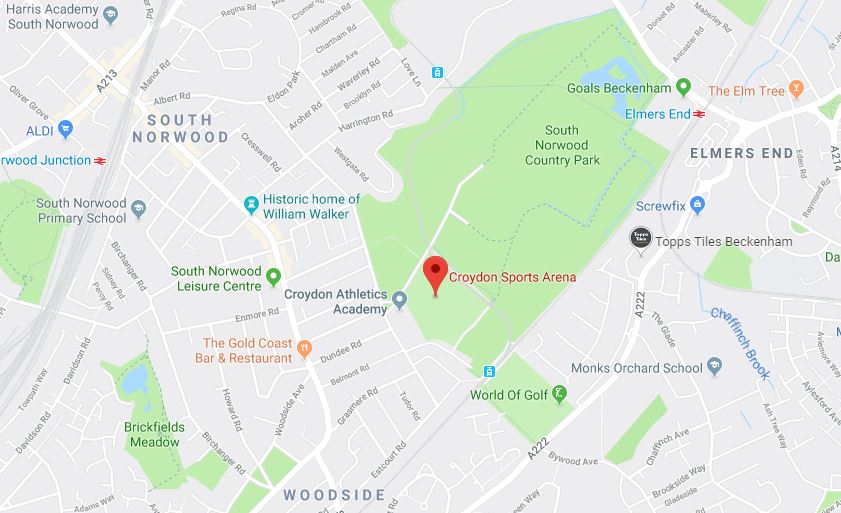 Croydon Amateurs FC was founded on 17th April 1953 to provide senior amateur football at the newly built Croydon Sports Arena. And whilst the idea for a senior club carrying the town’s name had been mooted prior to the war, nothing had become of the suggestion and the catalyst proved to be the laying of the running track and the need for the football pitch to be used.

At the inaugural meeting, Jack Milsted was elected Chairman and George Burrows Secretary, a strong partnership for the first twenty-years. At the time, the club had nothing, its initial funding being by way of public donations.

The Surrey Senior League suddenly found itself with a space to fill and this enabled the fledgling club to have somewhere to compete and ten years were spent in that competition.

The club was ambitious and after its annual rejection by the Athenian League, 1963-64 saw elevation to the Spartan League where it won its first Championship. The original clubhouse was also erected during this season, having been obtained from a local building site.

The extended Athenian League gave them the opportunity of further advancement in 1964 and the Division Two title won in 1966. Four years later, there was relegation followed by two successive runners-up spots which meant Premier Division football. But manager Jimmy Rose who masterminded those two seasons departed to Dulwich and the team broke up.

A season of struggle followed and then the Isthmian started to expand although the club missed out on the first intake, a time when clubs could openly pay their players. With the impending end of amateur status, the club dropped its suffix during the summer of 1973.

Ted Shepherd took over as manager, introduced a professional attitude and thus began one of the club’s most successful decades. 1974 saw election to the Isthmian League and in 1975-76 the team went undefeated in its league programme to gain promotion to the top table.

Shepherd’s decade saw four final appearances in the League, London Senior and Surrey Senior Cups, winning the latter in 1982. 1979-80 saw the club’s best run in the FA Cup, losing to Millwall in a Second Round replay.

Shepherd was succeeded by Barry Webb for the 1984-85 campaign and then Adrian Hill (1985-87) who took the club to its highest ever League position – fourth in the Premier Division – in 1986.

It was at this time that finances took

a turn for the worse, money – or rather the lack of it – was the root cause and seven seasons of struggle ensued. Matters weren’t helped when the local authority decided to redevelop the Arena, exiling the club causing a massive loss in revenue.

Founder Chairman Milsted, together with two of the Club’s other elder statesmen, Alf Haylock and President Charles Waters retired in 1990, and the years that followed under new management culminated in the Club’s name being dragged through the gutter.

There was little stability either on or off the field. Five Chairmen and eleven team managers, mounting debts and threats of closure are ample evidence of that.

The nadir of the mismanagement was 1993-94 but in stepped local businessman, Ken Jarvie at the eleventh hour. Phoenix Sun, his Thornton Heath League side, stepped up nine levels of football to keep the Club’s name alive.

Jarvie’s arrival sparked one of the club’s most successful periods but there was a financial cost He tended to do things his own way which caused some friction but he inspired loyalty from his players.

He led the club to promotion from Division Two in 1996 and a nineteen match unbeaten run at the beginning of 2000 saw Croydon storm to their first league title since 1966. In addition, the club reached its first cup finals since 1982. Defeat against Woking in the Surrey Senior Cup was forgotten a day later with victory over Purfleet in the Full Members Cup.

The club survived its first season back in the Premier Division winning the London Senior Cup but budget cuts led to the loss of a number of quality players and relegation followed a year later.

Jarvie stepped down during the summer of 2002 leaving the Club in a poor position and Dickson Gill took over to begin a fifteen year reign. The Club continued to struggle and was duly relegated to Division Two in April 2005.

Money remained an ever present problem and 2006 saw a season of consolidation and being placed in the Kent League in the big reorganisation of the non-League game.

A third place finish in its inaugural campaign was the best. Matters stagnated and regressed, the one on-field success being in 2009 when the Kent League Cup and Charity Shield found their way across the county border. There followed a short spell in the Combined Counties League before moving back east to the SCEFL Premier Division.

Gill’s resigned in January 2017 and left an void which has now been filled and the club is now looking to move forward once again under new Chairman Martin Burr.

On the field the club have shown a steady improvement over the past few seasons. Two 18th placed finishes were followed by 11th in 2016-17 and an impressive 5th place result last campaign.

The vultures from Whytleafe came and took the manager and a few players have followed.

2018/19 was a very bad year for the Club. Just 11 points were collected and relegation was confirmed early on. There was no chance of a quick return thanks to the Coronovirus Pandemic ending the 2019/20 and 2020/21 seasons early so we now go into the 2021/22 campaign looking to earn our place back in the Premier Division.