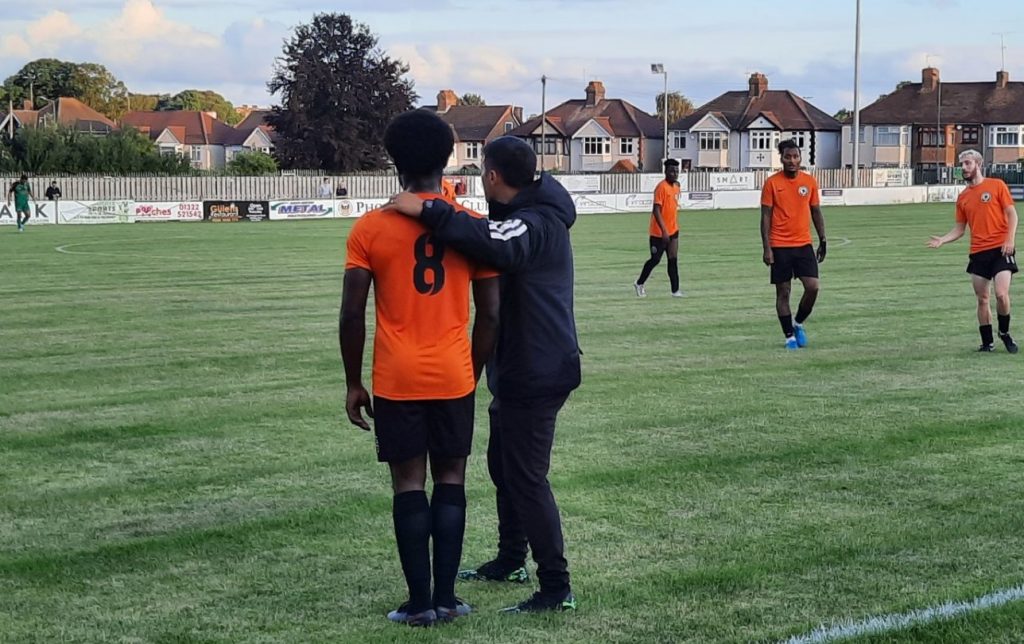 Tower Hamlets FC (formerly Bethnal Green United Football Club) was formed by Mohammed Nurul Hoque and Akhtar Ahmed in the year 2000. Chairman Mohammed Hoque first registered the name Tower Hamlets FC with the London FA in 2007, with a vision to change the name once the club obtained senior status. It was considered the existing name did not highlight the wider Tower Hamlets community.

Representing Tower Hamlets with its rich history and diversity gave the young people an opportunity to show what they could achieve. Tower Hamlets FC was created to give young people from the borough a sense of identity promote community cohesion, develop mutual understanding between young people from different backgrounds and opportunity for them to excel in a sport that they love. Since the formation of the club have played in several leagues including: Canary Wharf Summer League, Inner London Football League, London County Intermediate League and Middlesex County Football League, under the name Bethnal Green United FC.

The club won the Middlesex County Premier Division in the 2008-09 and thus were promoted to the Essex Senior Football League, the highest level of football the club has ever played at.

In our first season in senior football (2009-10), under the guidance of Justin Gardner, the team challenged for the Essex Senior League title, but ended the season finishing in 5th place. However, success was still achieved when the club won the "Double" of the Gordon Brasted Memorial Trophy by beating Takeley FC 2-0 in the final, and the Essex Senior League Challenge Cup, beating Burnham Ramblers 4-1 at the Len Salmon Stadium. In addition, striker Anton Stephenson was the league's top scorer with 34 goals and with it came the Don Douglas Trophy. The team continued a title tilt in 2010/11, but again finished short, completing the season this time in fourth.

A notable period of success came in the 2011-12 season when the club went on an FA Carlsberg Vase run, with some good results, culminating in a last 16 match away at Northern League side Dunston UTS, from Newcastle. The team lost the match 3-0 in the North-East against the side who would go on to the lift the trophy in May. The efforts of Justin Gardner were noticed by Ryman
Premier League club Aveley FC, and in February 2012, Gardner left to join the Essex side. Kirk Whitelock was installed as caretaker boss for the remainder of the season, but the team ended up finishing down in 9th place.

Anton Stephenson took charge for the 2012-13 season and done a wonderful job, but halfway through the season he had to step back and be away for a while due to personal problems, and Anton left his assistant manager Anthony Gradley in charge. Unfortunately, Anton returned too late in the season for the team's fortunes to turn around and ended up finishing in 12th place. Chairman Mohammed Hoque appointed AJ Olatunbosun and Steve Willis as joint managers for the 2013-14 season and they pushed title hopefuls Great Wakering Rovers, Enfield 1893 and Haringey Borough all the way, topping the table for a spell during the season, but the team finished in fourth, still with a club record points tally for senior football. The 2014-15 season was when one of the worst seasons in the club's history on and off the pitch.

However, success came for the Reserves in 2014-15, when under the guidance of manager Ade Abayomi, they finished halfway in their debut senior season in the Essex Senior League Reserve Division, but went on to lift the Essex Senior League Reserve Shield beating Thurrock FC 2-1 in the final. They also played in some first team games, winning some admirers with their nice brand of football, whilst also representing Tower Hamlets FC in the famous FA Youth Cup, unluckily bowing out to Brentwood Town on penalties, but only two games away from landing a lucrative tie against Premier League giants Arsenal.

This season (2015-16) sees Ade taking over from AJ Olatunbosun, and his squad being promoted to the first team, with the chairman as assistant manager to oversee the first team's progress. The majority of the squad under 23 years of age, and they are hungry and hard working and with that the future looks optimistic. The team will look to improve on last season's disappointing 17th place finish, and look to progress in the Emirates FA Cup and the FA Carlsberg Vase.

After the disappointment of last year, the chairman has accomplished a complete overhaul of Tower Hamlets FC, and last season he has took the decision to withdraw the Reserve team, one Sunday team and one of the Veterans League teams.

Chairman Mohammed Hoque is also proud to have the ladies team now representing the club. This was the missing jigsaw piece in our organisation. Our women's academy has been up and running for the last 3-4 seasons and it has now built up where we have a team to represent Tower Hamlets in the Greater London Women's League and in the London Capital Women's Cup. THFC are also very proud to be represented by our men's adult team, our ladies team and our youth team, who will be embarking on their third season in the FA Youth Cup.

Core Values:
Our Core values and ethos encapsulates the whole community, diversity, working together, engaging young people
which is embedded within the clubs plan for the future.
 Bringing different parts of the community together
 Encouraging positive relationships and tackling divisions between communities
 Providing strong leadership, involving people and giving them the tools and support to improve their lives
 Increasing people’s participation in activities Making activities accessible