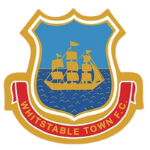 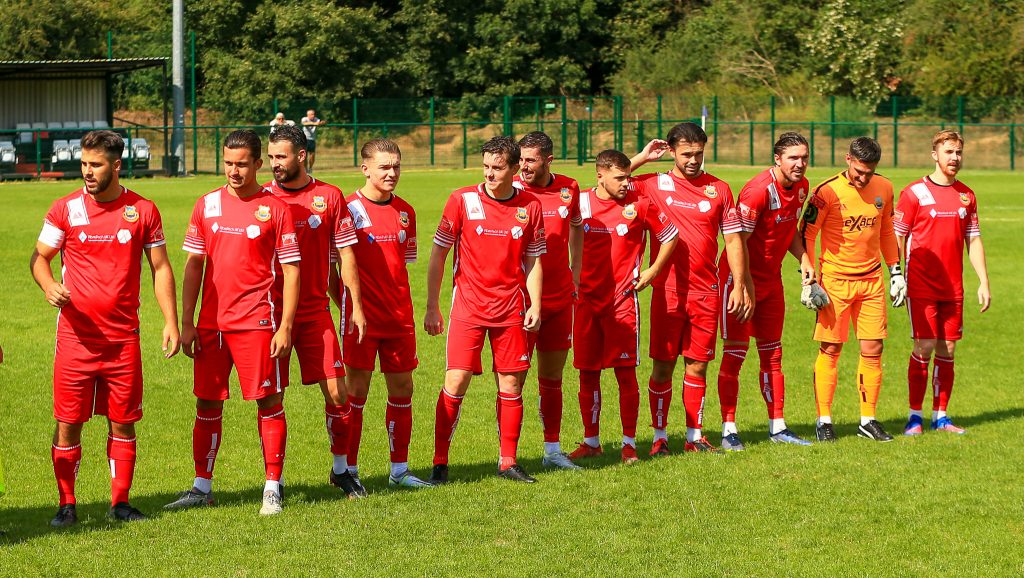 The first recorded football match took place in the town during October 1885 when, under the name “Whitstable United”, a team played Whitstable College. Earliest use of the name “Whitstable Town” can be traced to the following season (1886-87) when matches were played were played on a Friday at “Mr. Saddleton’s field” – an area of ground near the railway station. The use of the club’s current Belmont ground began in January 1888 with a friendly game against Herne Bay. There was a change in name briefly to “Whitstable Swifts” in 1893 but reverted to “Whitstable Town” just two years later. Whitstable Town played their first competitive game in 1897 – a Kent Junior Cup match that resulted in a 7-1 defeat by Dover Star FC. Shortly after this, the club joined the “East Kent League” and later played in both the “New Brompton” and “Faversham & District” Leagues. The club folded in 1904 only to be reformed in 1908. In 1908-09 Whitstable Town joined the Kent League Division 2 and achieved a respectable fourth place in their first season. Two teams were also entered in the Thanet League and they were both successful in lifting both the first and second division titles.

The first FA Cup campaign came in 1910. A 3-2 victory over Folkestone preceded a defeat by Dartford in front of a crowd of estimated at 2,150. Following the First World War, Town re-joined the Kent League and remained in the competition until the outbreak of World War II. The club won the Division 2 title in 1927-28 and 1933-34. However, the key success came in 1928-29 when the team lifted the Kent Amateur Cup (now superseded by the Kent Senior Trophy).

After one season in the New Brompton League following the Second World War, Whitstable returned to Kent League in 1947-48 (also playing in the K Division of the New Brompton League). Success came to the club as they won the Division 2 title in the 1949-50 season and gained promotion to the First Division until the League disbanded in 1959. These were sometimes considered the glory years as Whitstable temporarily became a professional club but the problems of competing with much wealthier clubs proved difficult and put considerable pressure on the club’s finances.

The loss of the Kent League came as a hammer blow. Wealthier clubs moved onward and upward to the more prestigious Southern League leaving behind a small band of teams fighting for survival. Town joined the Aetolian League briefly. Gone were the days of the money-spinning East Kent derby games against the likes of Folkestone, Dover, Sittingbourne and Margate. Matches against far off London-based sides were no substitute and, inevitably, the 1960’s became a period of financial problems and decay. The end of the 1959-60 season saw Whitstable bottom of the Aetolian League and a decision was taken to drop into the Kent Amateur League for a short period – an all-time low for a senior side with such a rich history – We were champions in 1960-61 and were as runners up in the Kent Amateur Cup. At the end of the 1961-62 season a decision was taken to enter the Seanglian League for the following season but this was a disaster as Whitstable mixed with the second string of a number of larger local clubs. The club then had one season back in the Aetolian League before joining the Greater London League. One piece of success was that the Town finished runners up in the Greater London League Group B Cup in 1965-66 losing the final 3-1 against Crittall Athletic in the final staged at Cray Wanderers FC.

The Kent League was reformed in 1967 and Town re-joined immediately. However, this was not the Kent League of the “heady” 1930s and 1950s. Populated by a large number of reserve sides from Southern League clubs, there was little to appeal to supporters… but it was a start.

Gradually, former Kent League clubs began to return. Some like Whitstable had wandered various leagues over the years. Others had encountered financial problems in the Southern League. At last, the League Management Committee was in a position to remove reserve sides from the competition and impose strict conditions governing grounds and facilities. East Kent derby matches became a reality once more – against Ramsgate, Canterbury City, Folkestone, Deal, Faversham Town, Chatham and, of course, our oldest and nearest rivals, Herne Bay. The club responded – building a club house and attempting to restore the Belmont to its former glory on limited funds. The “Town” celebrated its centenary in 1985-86 in a healthier state and the occasion was marked by games against Charlton Athletic and Crystal Palace. Both matches attracted large crowds to the Belmont. There were many developments that followed the appointment of Joe Brownett as chairman in the late 1980’s and sponsorship by D&J Tyres of Herne Bay. Since then, dressing rooms have been refurbished, the club house re-fitted, floodlights erected, a new snack bar created, committee rooms extended, the pitch levelled and a drainage system installed.

Success on the pitch had been elusive since the re-formation of the Kent League. Despite a regular “top 10” position, the best league finishes had been two “third place” spots. Cup competitions yielded greater success but there has been heartache as well…. “Runners up” in Kent League Cup twice and the Kent Senior Trophy on three occasions. The only major reward came in 1979-80 – a 4-3 victory over Chatham to lift the Kent League Cup at the Bull Ground at Sittingbourne. Trailing 2-0 and 3-1 in the final, the team recovered to score two late goals and an “extra time” winner. The club achieved it best FA Vase run during 1996-97. Despite being drawn away from home in virtually every round, Whitstable reached the last 16…just 3 matches from an appearance at Wembley in this nationwide competition. With everyone praying for a home draw, luck deserted us…North Ferriby United (near Hull) …away. A tight 1-0 defeat ended the dream on Humberside.

A few years ago in March 1989, the club and one of its most popular players (Gerry Allan) received coverage in the national press following one of the quickest goals in football history – timed at just over 4 seconds. From the kick off, the ball was rolled forward and Gerry attempted to lob the ball over the goalkeeper from the half way line. A slight miscue caused the ball to drop short but it skidded on the damp surface and passed under the goalkeeper’s body. Everyone dived for the Guinness book of records but it seems that there have been slightly quicker strikes. Had Gerry made a clean connection, it might have been the fastest goal of all time!

Whitstable did enjoy some success in the 2000-01 season, winning the Kent Senior Trophy at the Central Park Stadium, Sittingbourne. They held a one goal lead until the last minute of the final when VCD equalised. There were no further goals in extra time, so the game was decided by penalty kicks. In a dramatic conclusion, following 26 penalties, Whitstable eventually won 10-9 with goalkeeper Lee Hook the hero.

Town’s longest serving chairman Joe Brownett stepped aside at the end of 2004-05 season when supporter Tony Rouse took over the chair. 2006-07 marked the best season in the club’s history. Under player manager Marc Seager’s leadership the team won the Kent League and the Kent Senior Trophy. A treble was just missed out on the last day of the season as we ended up as runners-up in the Kent League Cup. We also had a good run in the FA Cup ending with a narrow home defeat against Margate in front of 1,144 people.

The championship brought about the long awaited promotion to the Ryman League. The first year in the Ryman League (2007-2008) started shakily but an excellent end to the season brought us into mid table and respectability with chairman Tony Rouse stepping aside and Joe Brownett taking the reins as chairman once again. After a difficult start to the second season, it was a mirror image of the previous year as we found ourselves again in the lower reaches of mid table.

The following five seasons saw a number of managerial changes with the side always providing a sprint finish to the season to ensure survival. Ex referee Gary Johnson became chairman at the start of the 2012-13 season. Nicky Southall led the team to the last 32 of the FA Trophy in 2013-14, including memorable wins at Carshalton Athletic and Hendon before losing 2-1 to Ebbsfleet United in front of 742 supporters at the Belmont Ground. Jim and Danny Ward took over as the management team from Nicky Southall at the start of the 2014-15 season and produced the club’s best position in the league, finishing in eighth place. The Wards moved back to manage Ramsgate after just one year and the whole of the season 2015-16 was one of constant change with managers and players coming and going. Chairman Gary Johnson then stepped down and Joe Brownett once again was the safe pair of hands to settle the club down. Scott Porter was appointed manager in an attempt to avoid relegation, but despite some encouraging results it was not to be and the club dropped back to the Southern Counties East Football League.

The club regained stability off the pitch and Joe and Scott continued in their respective roles and a 5thplace finish was achieved in 2016-17. The following season ended successfully with the team going on an incredible four month unbeaten run that brought two cup final wins, defeating Sheppey United in the Kent Senior Trophy and Tunbridge Wells in the SCEFL Challenge Cup. The main objective of promotion back into the Bostik (Isthmian) League was also achieved, as finishing runners-up to Sevenoaks Town was enough to restore Step 4 football to the Belmont. During the 2018-19 season, both chairman Joe Brownett and manager Scott Porter announced that they would be standing down from their roles at the end of that season, although both would continue at the club in alternative positions. The team finished in a respectable 12th place to consolidate its status back at Step 4.

The club had set up a football academy at the start of the 2017-18 season and had begun to work closely with Whitstable Town Junior Football Club to offer more opportunities for young players. This relationship grew stronger and led to the two clubs joining together in June 2019 under a new chairman, Steve Clayton, who had held that position in the junior club. The ownership of the senior club was formally transferred from the unincorporated members club to a new company, limited by guarantee, on 1st June 2019, with a number of new officers being appointed. On the field, former Whitstable Town player and Ramsgate manager, Lloyd Blackman was appointed the new manager and a reserves team was reintroduced into the Kent County League. Together with the growing football academy and youth section, a clear pathway had been established for young players in the town. Following two Covid disrupted seasons and a poor start to the 2021-22 campaign, Lloyd Blackman resigned as first team manager in September 2021 and was replaced by former Thamesmead Town and VCD Athletic manager Keith McMahon. Unfortunately, the team continued to struggle and Andy Drury was appointed as player-manager for the last seven matches, but despite a couple of wins, Whitstable finished bottom and were relegated to the SCEFL Premier Division for the second time in six years.

The summer of 2022 saw a major transformation at the club’s Belmont Ground, with the installation of a 3G pitch, together with other ground improvements including new LED floodlights. Manager Andy Drury left to manage Margate and former Lordswood and Tunbridge Wells manager Richard Styles was given the challenge of achieving promotion back to Step 4. 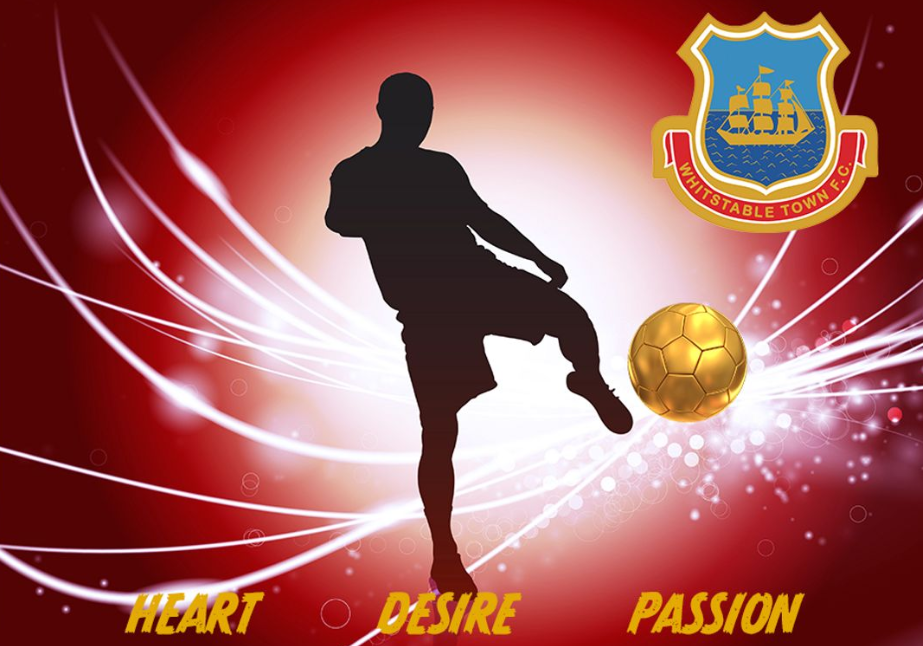