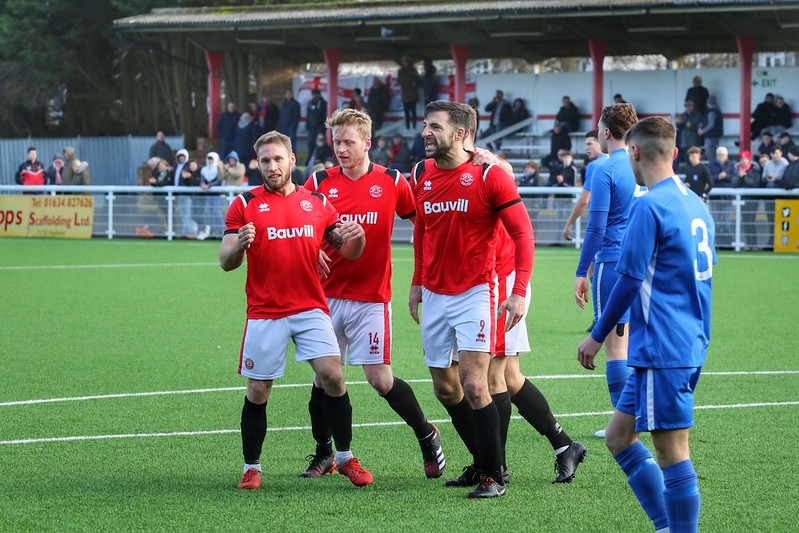 The club was formed in 1882 as Chatham United, when Rochester Invicta merged with the football team of the Royal Engineers Band with the intention of creating a side that was capable of holding their own with the best in the country.Harry Hobart's plan being to bring together all the best players in the Medway Towns in one team.They played their first match on 7th October that year, beating Harley Street F.C. 4-0. Owing to their strong Army connections, Chatham soon moved to a regular home on "The Lines", where they were to remain until 1889 - the beginning of season 1889/90 seeing them move to "Alderman Winch's Enclosed Ground", or as it is now better known, the Maidstone Road Ground.

Having been formed with an eye to competing in the F.A. Cup, they went on to reach the Quarter-Finals in 1888-89 - famously defeating Nottingham Forest after two replays, only to lose to the holders West Bromwich Albion.This game, which was played on "The Lines" where an admission fee could not be charged owing to Army regulations, was instrumental in the decision by the Football Association that all future matches in the competition must be played on fully enclosed grounds, where the visiting club would receive a share of the gate money.

Chatham were forced to resign from the Southern League during the 1900/01 season, owing to financial difficulties, but they soon rebuilt the club - playing as Chatham Amateurs for a brief spell in 1901 - before winning both the Kent League and Thames & Medway Combination in 1903/04 without losing a single game in either competition.They repeated the feat the following season, losing just three games, whilst also defeating Sittingbourne 3-1 in the Final of the Kent Senior Cup.

The First World War brought an end to football in the Medway Towns, but Chatham were one of the first clubs locally to return to action in 1919 - winning both the Kent Victory Cup and the Chatham Charity Cup (for the eighth time) in a shortened season.They briefly rejoined the Southern League in 1920/21, after the formation of a Third Division for the Football League had taken half its' members, but once again withdrew at the end of the season finding that the increased travel costs were a severe drain on finances.

A third spell in the Southern League, starting in 1927/28 almost finished the club.They stuck it out for two seasons this time, but once again the increased expenses - coupled with dwindling attendances - saw them drop back into the Kent League. Things were to get progressively worse, and 1933/34 saw the club take voluntary relegation into Division Two of the Kent League, which they won in 1934/35 without accepting promotion, before opting to revert to Amateur status.Having played in both the Kent League and Kent Amateur League in 1938/39, they decided to play in just the latter competition the following season - only to see all football suspended with the beginning of World War Two.They played just one game that season, beating London Paper Mills 2-0 on 26th August - and would not play again until 1946.

Post War, Chatham won the Premier Division of the Kent Amateur League in 1946/47, which was to be their last honour under that name - having previously dropped the 'United' in 1898.On 7th January 1947 they merged with Shorts F.C., the combined club taking the name Chatham Town at the request of the local Council, and a place in Division One of the Kent League for the following season. There they were to remain until the League disbanded in 1959, whereupon they moved to the newly formed Aetolian League.During this latter period they appeared in the Aetolian League Cup Final in each of the five seasons it was contested, though winning only once in 1962/63.The following year they finally captured the League Championship, as well as the Aetolian/London League Cup and then, when the Aetolian League formally merged with the London League they moved to the Metropolitan League, in 1964/65, in search of stronger opposition.

Although the club were drawing crowds of up to 1,000 playing against strong Non-League opponents as well as sides from Arsenal, Tottenham Hotspur and West Ham United, they lost no time in returning to the Kent League when it was reformed in 1968.Up until their return to the Southern League in 1983, they had won the Kent League on four further occasions, completing the League and Cup double in both 1971/72 and 1977/78.

For a brief period during the seventies they changed their name to Medway F.C., again at the request of the local Council, but happily reverted back to Chatham Town in 1979.In 1980 they achieved their biggest post-war success to date in winning the Eastern Professional Floodlight League, playing against some of the strongest Non League clubs of the day, including Maidstone United, and defeating Chelmsford City in the Final over two legs.

In 1983 Chatham returned to the Southern League for the fourth time, this time staying there until 1988, when having failed to gain re-election they were relegated back to the Kent League - once again in severe financial difficulties, with crowds often in double figures against poorly supported clubs, as opposed to the much healthier attendances they had enjoyed in the Kent League against more local opposition.

After struggling during their first couple of seasons back in the Kent League, the real turnabout in the clubs' fortunes came with the appointment of popular former player John Adams as First Team manager, however despite reaching the Third Qualifying Round of the F.A. Cup in 1993/94, taking the club to the Final of the Kent Senior Trophy in 1995/96 and finishing in the top three of the Kent League for three successive seasons, he was dismissed by the club following a disastrous start to the 1996/97 season.

1997/98 was to prove one of the most difficult seasons in the club's history.Problems with a new drainage system meant that only a handful of games could be played at Maidstone Road - which led to a brief return to their "spiritual home" on the Lines, courtesy of the Royal Engineers, as well as a brief ground-share with Gillingham at Priestfield Stadium.The club returned home for the 1998/99 season under new manager Carl Laraman, fortunes improving immediately before in January Laraman left to take up a coaching position at Charlton Athletic.His assistant, Steve Hearn, was appointed player-manager and finally led the club to the Kent League Championship, and promotion to the Dr. Martens League, in 2000/01.

The club enjoyed a good start to their first season back at this level, but a poor run of results at the end of the season led to Steve Hearn's resignation and the appointment of his assistant Peter Coupland as his successor. After a bad start to the 2003/04 season, Clive Walker replaced Coupland. Things improved dramatically, and a season that had looked certain to end in relegation, ended instead with Chatham in a mid-table position.

The 2004/05 season saw Chatham being placed in the newly formed Southern League Eastern Division. The campaign got off to a promising start, with Chatham sitting as high as fourth in early October, however a poor run of results coupled with Clive Walker's decision to return to his old club Dover Athletic, saw the Chats slip to 16th.Assistant Steve Binks was appointed manager and results improved towards the tail end of the season. Chatham finished the season in 11th place, and was Kent's highest placed club.

Following yet another Pyramid reshuffle, the next few seasons saw the club ping-pong between the Ryman League North and South Divisions with regular mid table positions. Frustratingly the club experienced regular wins against top six and promoted sides but often followed up with defeats to bottom six sides. Season 2006/07 saw Phil Miles - another popular former player - move up to take over as Manager. December 2007 saw Phil stand down due to work commitments with Steve Binks taking over the job again, then to be followed by 1st team coach Alex O’ Brien stepping up for the 2009-10 campaign. Throughout this period the club's strong youth policy provided several new established first team players and the club also achieved the coveted FA charter Standard award.

Season 2010-11 saw the club struggle on the pitch with Manager Paul Foley resigning in the final weeks of the season with Player coach Kevin Watson taking over. After achieving some great results Kevin was appointed to his first Managerial position at the age of 30 after four seasons Kevin resigned following a run of poor results but left the club with a legacy of some very goodplayers for the new incoming Manager Kevin Horlock in October2015, Kevin stood down at the end of the season due his commitments with Colchester United, Tony Beckingham took over in the Summer of 2016, the club now back playing in Division 1 South of the Ryman League, for their second season, after four seasons in the North, Tony stood down as Manager in September 2016, Darren Anslow took over as Manager, after suffering some heavy defeats, Darren was relieved of his duties in November 2016 and Paul Piggott was installed as Manager.

Despite a number of changes within the squad and some encouraging performances toward the end of the season, the damage had already been done and Paul and his team were unable to avoid the drop and The Chats were relegated to the SCEFL Premier. Despite this, changes at boardroom level have revitalised the atmosphere around the club and a number of ground improvements have been undertaken as the first step in what will hopefully be a new era of success for the club.

Following a disappointing start to the 2017/18 season and only 1 win in 8 league games, a management change was again instigated with Paul and his team being replaced in September 2017 with James Collins. The end result was a 16th place finish but the 'Chats' soon saw success as they were double Cup winners in 2018/19 winning both the Kent Senior Trophy and SCEFL Challenge Cup.

A further change of Management saw Scott Lindsay take the reigns during the 2019/20 campaign but unfortunately the Coronovirus Pandemic halted the League with the Chats firmly in the promotion race with just a few weeks of the season remaining.

The same happened again the following year so now the Club kick on and go into the 2021/22 season keen on finally sealing promotion to Step 4.